This transcript contains time markers and screen shots of the webinar.

…and then really importantly we have these new settings around Contracts and Holidays. So the Contract Settings… 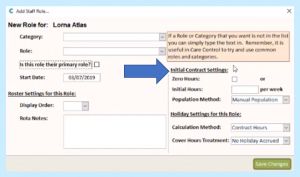 …this is where you initially populate what the initial Contract is for this Role. You’ve got two options, either it’s a Zero Hours contract so you would tick this box here… 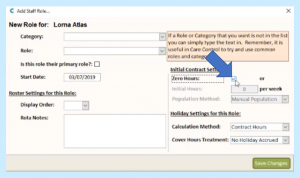 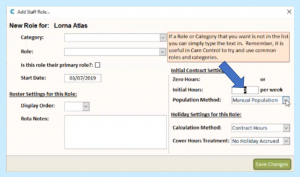 …and that can be obviously a fractional number of hours per week. The Population Method – and this is a really important setting – defaults to Manual Population… 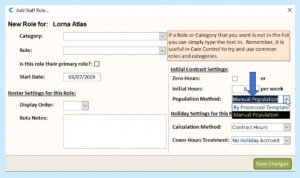 …but you can also have it so it’s set to By Processed Template and this is related to how we used to deal with contracts in the previous incarnation of Care Control.

You may be aware that in the previous version we used to work on holidays based on the rostered hours for staff members and we’ve got to support our existing customers who are using that system, so if you were to choose By Processed Template that means that the contract would automatically be updated as the rota changes. So it’s an option that you can have so you don’t have to worry about updating the contract. If your contracts for staff members are based around a fixed rota and you change that rota for a staff member, then their contract will automatically be changed based on the date that that rota becomes live and we’ll talk about rotas and how those change a bit later.

However, most of you will be using Manual Population which basically means you have to maintain any differences in the contract as time goes forward. 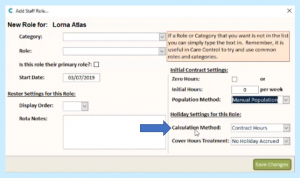 This Calculation Method is basically the method that the system will use to calculate hours for this Role and there are two options here; one is based on Contracted Hours and the other one is based on Accrued as Worked. 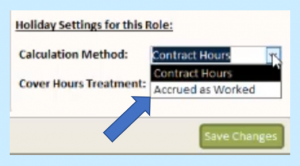 If you choose Contracted Hours then the system will use whatever the initial contract hours are – and as the contract changes – to calculate the holiday allowance for this particular Role. If you choose Accrued as Worked, then as hours are worked on the new roster system (which we’ll look at in a minute) then holiday is added into their allowance pot. So there’s your two options, again defaulted to contracted hours. Interestingly, if you have Zero Hours and you have Calculation Method of Contracted Hours, then that means that on this particular Role there will be no holiday allowance calculated, which can be valid if you’re dealing with holiday allowances in a separate way, possibly using an uplift in payment on their contract etc. 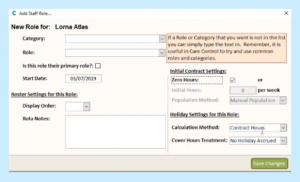 The final setting which is related to holidays is called Cover Hours Treatment. 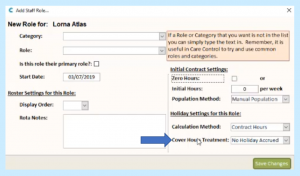 So we have in our organisations, we have staff who are on contracts, but they may work more hours than their contracted hours and this setting is really about what do you want to do about that in terms of holiday calculation etc.? The two options are No Holiday Accrued and Holiday Accrued. 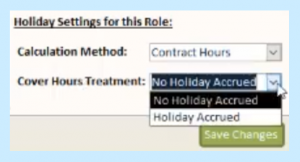 Now the way the system calculates Cover Hours, obviously we have a situation where somebody may be on say a 30 hours a week contract, but with our types of shift patterns in care homes, one week they may work 36 hours, another week they might work 24 hours. So the way that the Cover Hours Treatment works is we look at it across the holiday year and we work out whether – over the year – their working hours are over what the average contracted working hours should be. What this means is as time goes forward in the holiday year the Cover Hours Treatment will adjust automatically to work out whether any additional allowance needs to be added onto their holiday allowance settings.

However, the default is No Holiday Accrued… 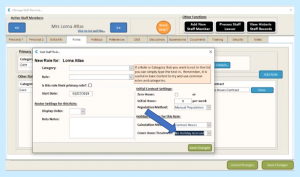 …so we’re not dealing with that for this particular Role.

Now if I look at the Role for this particular person, if I go and look at her current Primary Role… 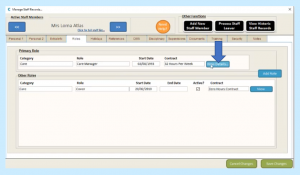 …so we’re going to go and actually look and we can edit some of these settings here: 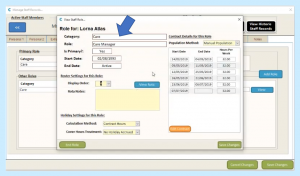 You’ll see we can do some changes to the rota and ordering which we’ll talk about a bit later:

We’ve got the same Calculation Method, one we looked at when we were adding a Role… 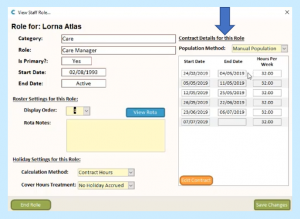 …and how those can change over time. Now you’ll notice in this example they’re all 32 hours a week. That’s because this record originates from the old system where the hours are being populated based on the templated hours. But, if you wanted to change the hours you just simply click Edit Contract… 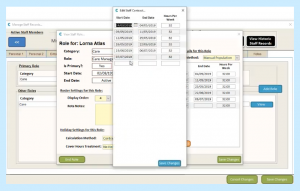 …and here you can go and change the number of hours that you want for a particular period of time. So, in this example you could say from the 7th of July going forward they’re actually going to be on 28 hours a week: 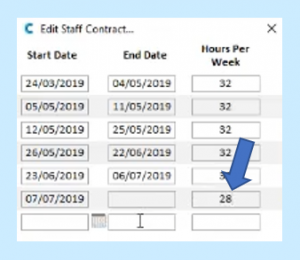 Now what’s really important is that these dates must be connected. So, you’ll see here it flows from the 11th to the 12th to the 25th,26th etc. What you can’t do is, for example, put in a gap of the 8th of July… 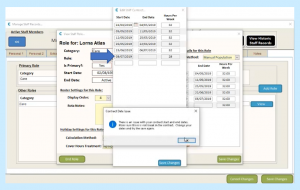 …and then you go and try and save that information and it’s going to come up with a message to tell you that actually you can’t do that because there is a conflict that the start and end dates aren’t sequential. So you’ve got to have sequential start and end dates even if you were going to put in that they went to a Zero Hours contract for a period of time… 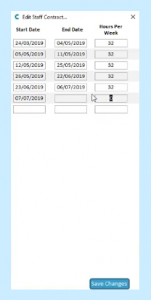 …you can do that, but they must be sequential hours for that week.